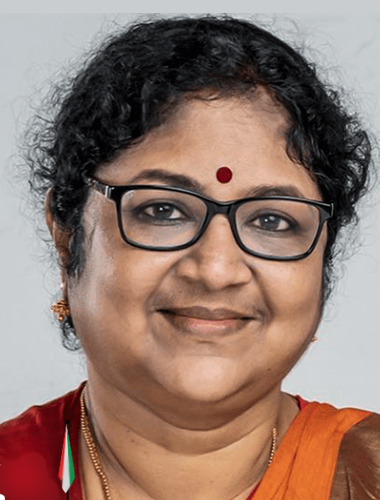 
Prof. R. Bindu is an Indian Politician of CPIM, who serves as Minister of Higher...Read More

The Government Law College, Thiruvananthapuram formed in 1875 is one of the oldest institution imparting legal education in India. Affiliated to the Faculty of Law of University of Kerala, the college is supervised and controlled by the Government of Kerala and was ranked as the 23rd best law college in India in 2007 by INDIA TODAY.

With a well experienced and eminent team of faculty, the college produces top scorers of the University every year. The College has a well maintained Library and reading room to facilitate students and has hostel facility for male students.In pursuance of the decision of the Hon'ble Supreme Court an Anti-Ragging Committee and an Anti-Ragging Squad have been constituted with the Principal as the head, to curb ragging. And there is also a Women Grievance Cell to look into the general welfare of women in the college.

Serve the law, teach it, study it, practice it, and work to humanise and instill an ethic of service to clients and community.

Rooted in the heritage of over a hundred and forty years, we aspire to establish the institute as the torchbearer in the field of legal education in the country. A temple of learning where one understands the delicate balance of law. We aim to delve into the depths of law to retrieve the light of justice for the needy. It is in our vision to envisage laws to embrace the changing human needs by treating all as equal in a justice oriented manner.

On the 31st January, 1875 the Government of His Highness the Maharaja of Travancore sanctioned "the Organisation of a Law Class in connection with His Highness College at Thiruvananthapuram to enable candidates from Travancore to present themselves for the Law Examination of the University of Madras and to encourage others to pursue the study of Law systematically", The order sanctioning the scheme directed that it shall be worked on the same lines as the Class attached to the Presidency College at Madras. Mr. W. E. Ormsby, Barrister-at-law, then a Judge of Sadur Court of Travancore was appointed Professor of Law in His Highness the Maharajas College. He opened the class on 9th February of the same year. In 1877, His Highness College was affiliated to the University of Madras in the Faculty of Law.

The class was thus continued till 1894 when in conformity with important aIterations in the bye-laws of the Madras University regarding the B.L. Degree Examination, the institution was re-organised on an entirley different footing. The Law Class which till then was working as a part of His Highness College and the Professors whereof were treated as members of that College was raised to the status of an independent College under the designation of "His Highness Maharaja's Law College, Thiruvananthapuram". A complete set of rules was also sanctioned by the Govemment for the control and regulation of work in the college. The rules prescribed the qualification required for the members of the teaching staff.

In August 1949 the college was shifted to Ernakulam to fit in with the new set up arising out of the integration of erstwhile State of Travancore and Cochin and the location of the High Court of the United State at Eranakulam. In 1954 it was again brought to Thiruvananthapuram, leaving at Eranakulam a sister college and was housed in the current premises in the Highland Bunglow on the Barton Hill. Under the University Act of 1957, the college was transferred to the control of Government of Kerala. In 1961 Government made the Thiruvananthapuram Law College a permanent institution.